“Stones are truly as fundamental as it gets,” says Sarah Thomas, owner of Clarity Acupuncture and Clarity Stone Medicine, who has been studying Chinese medicine and the applications of stones in healing for the past eight years.

“Indigenous cultures of the past such as the Taoists and Native Americans realized that everything in nature had a purpose and could be used in healing,” Thomas says. “It was this fundamental connection with nature that led them to explore the ways stones could be incorporated into their lives, from healing to tools. 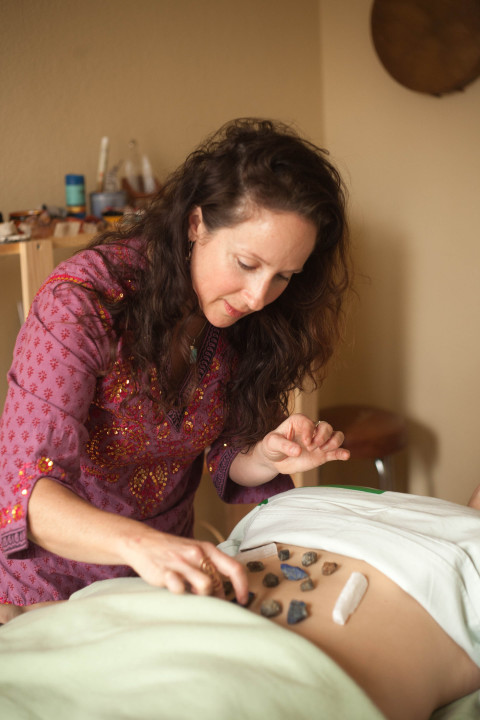 “Stones are the oldest living things under the surface; they are literally the roots of the plants, ” Thomas notes. The positioning of stones deep under the surface and close to the core is a tip off on how stone medicine works for humans, she points out. “Their medicine is to treat what is under the surface in us … all the subconscious and unconscious patterns living out through our lifetime,” she explains.

“Stones are the grandmothers of herbal medicine; it’s time we started really experimenting with the deepest offering the earth has given us,” she says.

“I’ve worked with many clients who have had unbelievable experiences when they started working with stones,” says Thomas as she mentions a video series she is working on called “Stone Corps” (named after Story Corps), where she interviews clients about how certain stones have impacted their lives.

Since ancient times stones have been used in correspondence with certain meridians and points in the body, Thomas explains. “There are stories of people running away into the woods to see a medicine man or woman and return home with powdered crystals for ingestion, stone elixirs and mineral powder poultices.”

In fact, the very first acupuncture needles were made from stones, Thomas says. “They were originally made from flint, opal or obsidian before stainless steel factories came into production.”

In her office, Thomas offers acupuncture as well as a non-needle practice where stones are placed on the body. “This is a great alternative for people who like Chinese medicine but are afraid of needles,” Thomas notes.  “They (the stones) are equally powerful or more powerful than needles. A lot more chi is in a stone than a needle that is produced in a factory,” she says.

The art of ancient stone medicine

Working with stones as a healing ally generally comes in one of two ways – internally or externally, says Thomas.  Stones can be  placed on top of the body, and “don’t be afraid of Scotch tape,” she grins. “It is such good medicine to lay with a stone like rose quartz, which will always be calming and gentle like a mother that will always hold you.”

In her treatment room, Thomas has a table covered with jars that are holding different stones and crystals of various sizes and character. “I would really like to see more people getting the stones on their body,” Thomas says with a spark in her eyes. “Stones show you your essence and get you in touch with your own preciousness,” she continues. “That’s the root of so many problems –  self-worth.”

After completing Thomas’ Stonalist Certification program at Appalachia School of Holistic Herbalism last year, Teal Chimblo Fyrberg began a stone medicine practice of her own. As a certified yoga teacher, she was immediately drawn to ways stones could be integrated into her yoga and healing offerings. “The ways stones can be utilized to deepen and enhance your yoga practice is endless,” says Fyrberg, who speaks about how stones can be naturally introduced to a meditation practice or into restorative poses.

Through her business, Wild Katuah Healing Arts, Fyrberg offers stone medicine treatments, yoga practices, herbs and personalized stone elixirs that can be taken internally.  Given her background in herbal medicine and alternative forms of healing, Fyrberg was already adept at the subtleties of energetic medicine. Making her own herbal tinctures and flower essences, the transition to stone elixirs was a piece of cake, or “crystal clear.”

Fyrberg’s line of stone elixirs that can be taken internally is called Obsidian Butterfly Elixirs.  She tries to make elixirs on the full or new moon “to potentize the medicine,” she notes.  “A lot of intention, love and connection go into these, a lot of ceremony as well.” The Blue Stone Elixir, for example, includes blue calcite, blue fluorite and lapis lazuli and is described by Fyrberg as able to “fill what is empty.”

“This blend goes deep into the kidney meridian, to the essence or shen,” she says. “It soothes and anchors our essence so that we can move forward with new beginnings.”

“What I love most in the stones is that they go down deep, to the Yuan level,” says Fyrberg, “where they can deal with the soul, the bone marrow.”

Fyrberg refers to the stone elixirs as energetic medicines, similar to that of a flower essence – only you are working with the essence of a stone rather than the essence of a flower. “Stones are stable, deep, dense, and are made up of a very highly ordered atomic structure.” Fyrberg notes.

“Stones are the record keepers; they store information. Now imagine a stone millions of years old – what does that carry?” she asks.

“Everyone knows that localized medicine is one thousand times better than non local medicine” says Thomas, who leads groups into the Appalachian Mountains on rockhounding trips to give locals an opportunity to collect stones.

“Mica reflects back to you, ‘You’re good, You’re good,’” she says. Mica is abundant in this area and was used by the Cherokee for ritual purposes.  “It was a very spiritual stone for them and the Chinese,” Thomas says.

She goes on to describe our local treasure chest: “Garnet is plentiful in our local mountains, especially the iron-rich form known as almandine. It’s been in the earth here for 450 million years! Rockhounders from all over the country come to this area for the elusive rod-shaped garnet. Although no one knows why it forms like that here, it’s still a mystery to scientists even.”

“The native Cherokee used garnet;  to them it represented blood, and women used it for fertility, childbirth, menstrual issues and everything associated with a woman cycling with nature. Also power, strength, vitality, essence … the ability to be strong in battle,” she says. From a Chinese medicine perspective, Thomas explains, to have blood is to have juice and subsequently aliveness: “Garnet is considered one of the most physically supportive stones of the entire mineral kingdom. It’s amazing for rebuilding and restrenghtening after depletion or disease.”

Thomas mentions the many healing arts that have gravitated to Asheville.  “Well, many people believe that Asheville is sitting on a huge underground kyanite boulder.”  Kyanite is what makes up most of Mount Celo, located in Pisgah National Forest near Burnsville, Thomas says. Thomas points out that Asheville and Tibet are the two greatest resources for kyanite on our planet.

“Kyanite is a simple aluminum silicate which acts as a bridge, a connector. It can connect two people, or two elements of nature, like stones and plants.” On a deeper level, she explains that it can connect people back to manifesting their destiny into the world, which is done through the kidneys from a Chinese medicine perspective.  “It can even connect physical tissues back together. It’s great after surgeries or for fractured bones or torn ligaments,” says Thomas.

The next stepping stone

For Thomas and Fyrberg, working with stones has also led to a deeper sense of connection to themselves. “It’s been eight years since I started practicing, and over this whole time so much has come up about my faith in the unseen, the unknown,” Thomas says. You can really see she is considering the effect the stones have had on her life as she continues, “The stones have helped me become a student of the things I don’t understand. I learned to listen to the universe rather than control it. Now I have faith in myself, that I’ll keep showing up at the great abyss for the unknown.”

Fyrberg echoes a similar inner transformation: “I made my first elixir under the full moon and had profound transformations. It was from that experience that Obsidian Butterfly was formed.” When we work with stones, she adds,  “A deep part of us inside says, ‘I remember this.’”